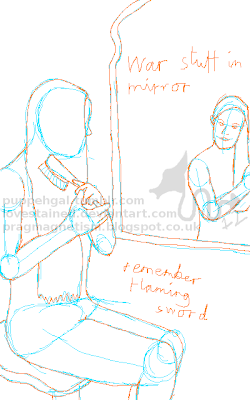 Two weeks down, fifty to go, right? xD Only had time for a quick doodle since belly dancing starts up again tonight and I need to do some chores and I want to get some writing done.

The third horseman, War the Red Rider, as portrayed by Hope. When she wasn't out maiming people in the name of Lord Apocalypse her favourite hobby was brushing her hair in front of her mirror, vain creature. 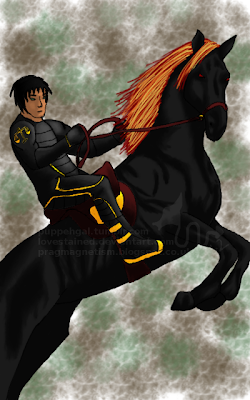 And we're back up to date ... at least I think we are. Well, it doesn't matter in the long run 'cos I finished the damn Famine picture! This was such a pain in the ass, seriously, shading all the black, and then it turned out I'd shaded it wrong on some levels and then once everything was shaded having to go back at re-colour all the bits I'd missed.

I have to admit though, the end result is quite awesome. I'm quite pleased with how the mane turned out for one, and the horse's body, but that's mostly down to my beloved DF taking this as an opportunity to show me how to make something appear gaunt, he teaches better by demonstration after all. After finishing this though my hand was cramping so badly I just saved and went to bed.

Today I took a break from the horsemen and finished that silly little scene from the X-Men RP I'd started the blue lines for the other day. For my character's birthday there were drunk party games and after playing musical chairs there were only the two speedsters Jean-Paul (Northstar) and Noriko (Surge) left in the game (yes, there was a lot of cheating xD).

When the music stopped they both grabbed the chair at the same time, and Jean-Paul tried to run off with it while Noriko was clinging onto it for dear life, which resulted in this picture. A few moments later Jean-Paul decided to jump into the pool to get her off, and thus won the bottle of raspberry flavoured vodka that was the prize.

My character had an awesome birthday ^-^ 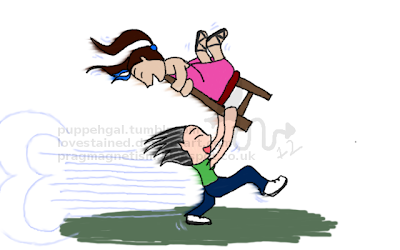 Well, that head-cold thing kicked my ass for a day or too, but I still managed to get some arty-ness done. 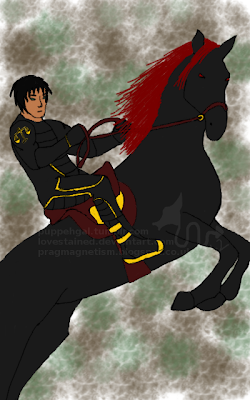 Day eleven was spent mostly asleep, but I got the pony's mane done and broke up the black with some gold ... well, at the moment it just looks like yellow but HOPEFULLY it'll look gold when it's done. 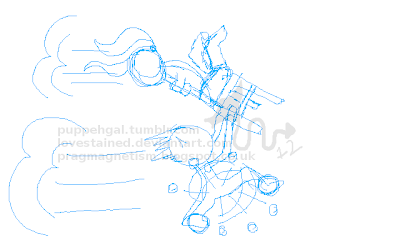 Day twelve I just did the blue rough lines for a cutie-fied scene from the Nightscrawearth RP that I said I'd draw.

I've also started to watermark my pictures on the advice of DF, just in case I ever get good enough for people to try stealing my work >.>

Now, off to get some more art done before I get sleepy again!
Posted by Pup at 07:35 No comments: 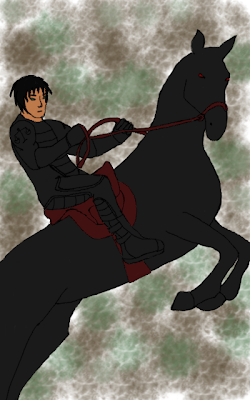 Look! I did something! Only flat colour since I'e been feeling a bit ill the past couple of days and I think I need a nap but I really wanted to get something up.

Traditionally it's Famine who's the black rider of the apocalypse, not Death, so I foresee this picture going 'Fifty Shades of Black' on me unless I can think of a different colour for the details on the uniform ... maybe gold? I dunno, I'll sleep on it.

Email ThisBlogThis!Share to TwitterShare to FacebookShare to Pinterest
Labels: colouring, doodle-a-day, famine, horsemen of the apocalypse, nightscrawlearth, now we return to your regular scheduled programming

Email ThisBlogThis!Share to TwitterShare to FacebookShare to Pinterest
Labels: DF is fantastic, now we return to your regular scheduled programming, still no bloody pen, we interrupt your broadcast ...

Noooo, not mincemeat, minced meat, as in the ground up bits of dead cow you fry and chuck into bolegnaise and chilli.

Every now and then DF and I like to have what we call 'culinary adventures', we hear or see random, strange sounding foods and think "we should give that a go". Years ago a friend of mine mentioned to me how one of her friends had made a savoury cake, where they replaced the sugar with cooked minced beef, and tonight we decided to give it a go since we couldn't decide what to have for dinner. This beauty follows the basic Victoria Sponge recipe and I can whip one of these up in my sleep (I've been making them with my Mom since before I can even remember).

The math behind a Victoria Sponge is simple enough, all four ingredients are in equal amounts, and the average large egg will weight about 50 grams, so if you're just home baking all you have to remember is that it's 50g of flour, butter and sugar (or minced meat) per egg you use.

However, we quickly discovered that this won't fly with a meat cake, as you need to fry the meat before putting it in it will naturally reduce as you cook it, so ultimately our ingredient list looked more like this;

First fry your mince till it is cooked through and there's no pink meat visible, depending on what type and quality of your meat you may have to drain the fat off as you would when preparing it for any other form of cooking. Remember, always drain your hot fat into an empty cup or tin, leave it to cool then scrape it into the bin, never pour hot fat straight into your bin or down the plug, unless you like melted bin bags or clogged drains >< Then put your meat to the side to cool off.

Once cooled, weigh out your butter, add it to a mixing bowl and mix the meat in with the butter, along with what ever your preferred seasoning is, we added a touch of salt, pepper and oregano, and mix thoroughly. By the time you're done it should almost look like you'd got bread crumbs mixed into the butter. Then add your eggs and mix again till you're at a semi-stiff consistency. Finally measure out your flour and sieve it into the bowl, stirring it in gently till you can no longer see any of the white flour.

Then it's simply a matter of greasing up your baking tin, pouring your mixture in and popping it onto the middle tray of your preheated oven. We left it in there for about 30 minutes, but I'm fully aware that different ovens cook things at different speeds (for one thing, everything always takes a bit longer in our oven since it's not got an amazingly good seal on it) so I'd recommend leaving it it for as long as a normal sponge takes to bake, which is usually between 20-30 minutes.

When it's done you may peek into the oven and see what looks like fat bubbling up around the edges of your tin and panic like it did (Oh no! How do I drain fat from a cake?) However once I turned the heat off it vanished without a trace and there was no soggy, fatty cake sitting at the bottom, so I can only assume that it was in fact some meat juices that were absorbed back into the cake once the oven was turned off.

And that's it, serve it while it's still hot with some mashed potato 'frosting' and some gravy 'sauce'. If you're feeling fancy like we were, grate some cheese into the mash, add a spoonful of coarse-grain mustard and put some mint sauce in the gravy.

And how did it taste? Delicious, it's a warm, hearty meal, suitable for winter. It was unusually chilly today so it warmed us up a treat. It would also say it's a very heavy meal (I don't wanna think about how many calories there were in there) so I wouldn't recommend eating it if you've got a lot of moving around planned for later on.

I also suspect it would make excellent after-party food. Cook it up before you head out for a night on the town and help yourself to a slice once you're back home to soak up some of that booze and wash it down with a pint of water before you head to bed, sounds like a pretty good hangover preventative.

If you've read this and given it a go, leave me a comment to tell me how your Savoury Cake went ;)

Day two, still no sign of wretched pen. I can draw on paper but I've got no way of transferring it to my computer, don't even have a phone camera to take them with.

Pup
Just trying to find my way in life.